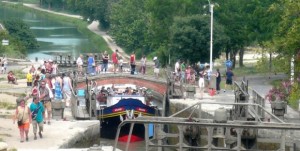 The 9 locks view from the top

Of all the works of the Canal du Midi,  the nine locks of Fonséranesare is undoubtedly the major work. This  “staircase” water 312 m long allows boats and barges to cross a drop of 25 m.
Eight thousand ships pass each year these locks and offer a nice show at 320,000 visitors.

The Canal du Midi, the culmination of a long dream

The Romans already wanted to link the Atlantic to the Mediterranean by a canal. It took until 1667  with the tenacity and the financing of Pierre-Paul Riquier to witness the start of construction. The Canal du Midi was inaugurated by Daguesseau king’s steward in May 24, 1681.
The origin of Pierre-Paul Riquier is for many in choosing the canal route. He was born in Béziers, probably on June 29 1609. He will fulfill the technological prowess and crushed the opponents  for the channel passes through Herault and his hometown. The digging of the tunnel of Malpas (1680) and the construction of the nine locks of Fonséranes (1680) are the illustration of his will and tenacity. 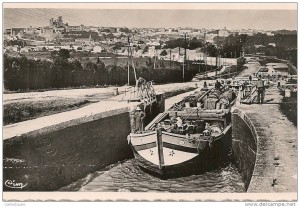 The channel will see its commercial peak in 1858 with 110 million tons / km and 100 000 passengers. The propulsion motor is increasingly used during the thirties instead of animal traction. The commercial freight traffic terminates in 1980 and gave way to the tourist traffic.

In December 1996, the Canal du Midi is protected as a UNESCO World Heritage Site.

With 320,000 visitors annually, it is the third attraction visited in Languedoc-Roussillon, after the Pont du Gard
and the city of Carcassonne.

The nine locks of Fonséranes | a tribute to Béziers 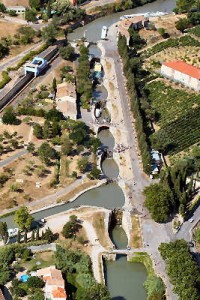 Site of the 9 locks is really beautiful. The succession of egg-shaped basins faces the city of Beziers. It is not excluded that Pierre-Paul Riquier wanted to pay tribute to his hometown. 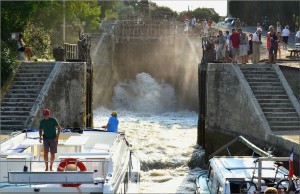 From the top of the hill to the river Orb, vertical drop is 25 meters. It took eight locks to build over a length of about 315 meters. Many tourists contemplate the beautiful spectacle of the successive opening of the nine valves.

It is a boat trip starting point to sail with family and friends or in a barge with a guide.
Enjoy the shores to stroll on foot or bicycle.

Route from the cottage