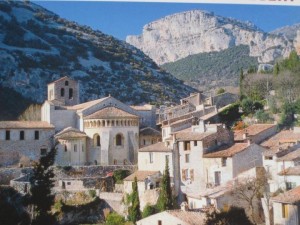 The medieval village of Saint-Guilhem-le-Désert and the abbey of Gellone are registered as World Heritage Site by UNESCO under “Chemins de Saint Jacques de Compostelle.” It is a tourist destination frequented every year by 650-700 000 visitors.

Village of Herault to visit with family or friends

In Languedoc, this medieval village is classified among the most beautiful villages in France. It is developed on the left bank of the creek Verdus , it is a village street.
Let yourself be drawn into its medieval past and admire its Romanesque and Renaissance windows, or even its many arches while climbing towards the square. 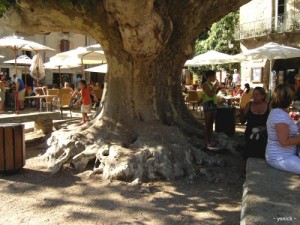 The Church of St. Laurent (late the XIth and early the XIIth century), the prison tower (XIIth) or the Giant’s castle, complete this rich evocation of the past.
It’s finally time to cool off or restore on medieval square where a giant plane tree, planted in 1855, deploys its salutary greenery.

Abbey of Gellone: jewel of the first Languedoc Romanesque art

The Abbey of Gellone is the XIth. You can visit the pre-Romanesque crypt and the cloister which a large collection can be found  in the museum “Cloisters” in New York .
Abbey retains historic organ built in 1782 by the famous organ builder JPCavaillé. It is considered one of the most beautiful witnesses of the French Classical Organ. 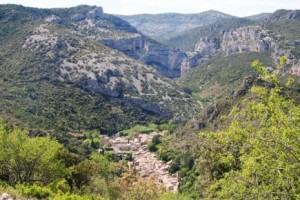 Note that it is also necessary to visit the abbey to pray before the relics of Saint-Guilhem and the True Cross.

A landscape of the Hérault favorable to walks and hikes

The village is located in a majestic landscape between the mountains of Saint-Guilhem-le-Desert, the gorges of the Herault and the Languedoc foothills.

From the square, one can do several walks to discover the circus of “end of the world” with steep cliffs and hills of Saint-Guilhem which shelter a rare species: pine of Salzmann.

Route from the cottage

Photos to discover this cottage for 6 people